END_OF_DOCUMENT_TOKEN_TO_BE_REPLACED

Utilities are in the thick of an industry transformation driven by technological and competitive forces. 2019 shows no signs of slowing down. We have highlighted 5 key trends to stay ahead of in the coming year, so utilities can continue to position themselves for success.

END_OF_DOCUMENT_TOKEN_TO_BE_REPLACED 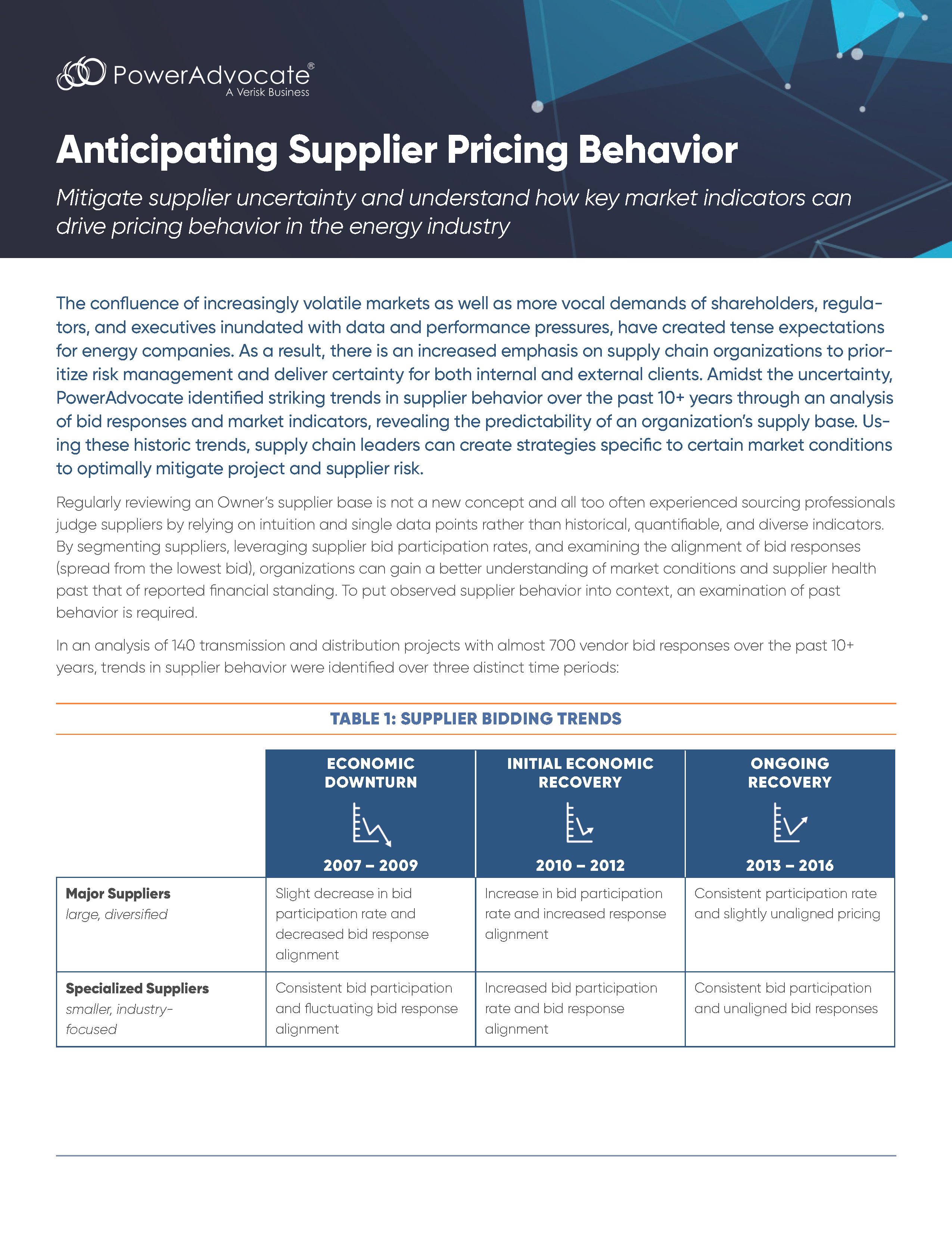 The variability of supplier responses to bid events can pose significant financial and operational risks to energy companies, especially as this behavior is prone to change when market and economic conditions shift. Variances in bid responses during the recent economic recession and recovery motivated PowerAdvocate to analyze the impact of macroeconomic factors on supplier bidding behavior. The aim of this analysis was to uncover trends that, when coupled with project and company-specific data, will enable industry leaders to better anticipate and mitigate project and supplier risk. If you missed our introduction of this analysis, you can read our previous blog about it here.

Our team hypothesized that suppliers who offer a diverse range of services, work across multiple industries, and service a wide geographic area respond to macroeconomic circumstances differently than smaller or more specialized suppliers. To measure these differences, and to better understand how a supplier’s profile influences their behavior, the team categorized bid data into two groups: bids from major suppliers and bids from specialized suppliers.

END_OF_DOCUMENT_TOKEN_TO_BE_REPLACED

Historically, energy firms have seen uncertainty in their supplier’s behavior as simultaneously unmanageable and a source of severe risk for their operations. This uncertainty can cause major projects to fall behind schedule and can create reputational and financial loss for an organization.

While this risk has always been a concern for energy firms with high exposure to contractors, the volatility of today’s market highlights the need for all companies to be able to proactively mitigate the risk that suppliers pose to major projects and operations.

END_OF_DOCUMENT_TOKEN_TO_BE_REPLACED

Solar Tariffs Expected to Impact Costs for Solar Projects: How to Mitigate, Plan, and Prepare

Higher prices are on the horizon for utility-scale solar projects due to tariffs and quotas recently approved by President Trump. This new legislation could seriously impact financial plans for solar projects, but expertise in capital projects, specifically renewable projects, can help utilities, EPCs, and developers mitigate these costs and prepare for future changes.

Why are the rules changing?

In September, the International Trade Commission (ITC) determined that U.S. solar manufactures experienced significant injury due to imports of crystalline silicon photovoltaic (CSPV) solar cells and modules. This investigation stems from the United States’ Global Safeguard law, where an industry representative may petition the ITC to determine if imports are causing “serious injury” and recommend remedies. The petition was filed by the recently bankrupted Suniva and later joined by SolarWorld.

On January 22, the Trump Administration followed through with the recommendations from the ITC and imposed a four-year solar import tariff that will start at 30 percent in the first year and gradually drop to 15 percent. This tariff will apply to all CSPV solar cells and modules that are imported into the U.S. There is a quota specifically for solar panel cells which excludes the first 2.5 GW of cells imported into the U.S. each year, but the details on how the quota will apply remain undetermined. Like the tariff, the quota will last four years.  All countries are included except for Generalized System of Preferences (GSP) beneficiary countries, which account for less than three percent of total imports.

END_OF_DOCUMENT_TOKEN_TO_BE_REPLACED

What Utilities Need to Know about Energy Storage Cost Drivers

More likely than not, your utility is already or soon will be procuring battery energy storage as part of its grid modernization strategy. In fact, according to BCC Research, the global market for grid-scale battery storage technologies is projected to reach nearly $4.0 billion in 2025, up from $716 million in 2015.  Battery costs have fallen dramatically over the past decade. However, events in the Democratic Republic of the Congo are putting the brakes on further cost reductions. Here’s a look at what’s happening and how you can approach your battery procurement planning in light of these events.

END_OF_DOCUMENT_TOKEN_TO_BE_REPLACED

As the Texas and Louisiana Gulf Coast recovers from Hurricane Harvey, Supply Chain organizations face the challenge of navigating its effects, from chemicals to logistics to labor.

END_OF_DOCUMENT_TOKEN_TO_BE_REPLACED

Why Your Utility Should Do Should-cost Analysis

September 21, 2017 at 7:09 AM / by PowerAdvocate posted in Cost Reduction, Industry Insights, Power & Utilities

Do you manage a utility supply chain, procurement process, or supplier relationships? Or collaborate with and depend on teams that do? If so you know how heavy a lift it can be to effectively manage asset-intensive energy sector costs. Should-cost analysis helps address two key challenges that get in the way of delivering even more value for your organization.

END_OF_DOCUMENT_TOKEN_TO_BE_REPLACED

The Chief Procurement Officer’s organization has become a central driver of utility competitiveness and operational efficiency. During the EEI Annual Conference 2017 in Boston earlier this month, we had a number of discussions with CFOs around how Finance and Supply Chain can collaborate more closely to drive enterprise-wide value and efficiencies. Here's what we're seeing.

END_OF_DOCUMENT_TOKEN_TO_BE_REPLACED
<< Prev All posts Next >>
Subscribe to Cost Insights