Demand for sand used in oil field operations plummeted after the oil-price crash in mid-2014 and the subsequent sharp drop-off in well completions activity. This trend, however, has recently reversed. Since late 2016, a surge in drilling activity in the Permian, coupled with the activation of drilled-but-uncompleted wells (DUCs), has led to a massive increase in sand demand in the basin (Figure 1). During the first half of 2017, total US sand proppant demand was 63 million tons per year, a 75% increase over 2016 levels. 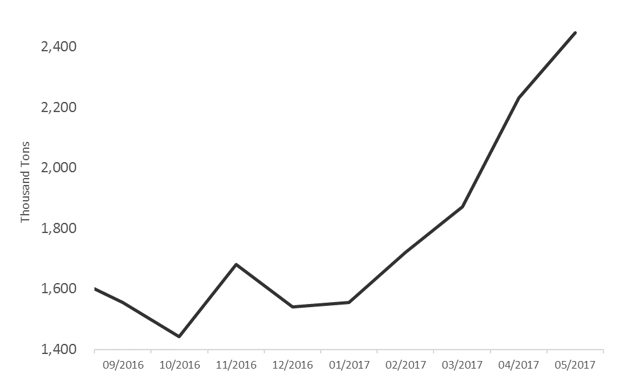 Despite its magnitude, this rapid demand growth did not put the overall sand market into deficit. Rather, PowerAdvocate’s discussions with market participants have indicated that logistical bottlenecks, rather than limited supply, are the factors constraining sand availability.

Prior to last fall, the majority of sand used in the Permian Basin was Northern White sand, primarily sourced from Wisconsin. Delivering this sand from mine sites to well sites requires long-haul rail lines, transloading facilities for rail-to-truck transfers, and short-distance trucking for final well site delivery, all of which were constrained over the first half of this year. For instance, reports indicated that limited capacity at transloading facilities bottlenecked sand delivery and that limited supplies of trucks and truck drivers increased final delivery costs. 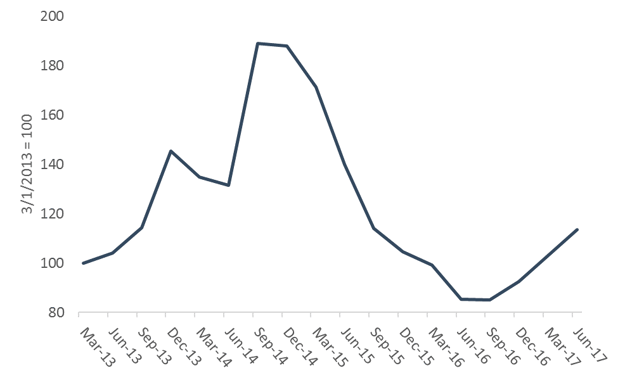 A Surge in Mine Investment

Since the start of this year, Permian Basin operators have increasingly been switching to locally sourced brown sand. Despite being considered inferior in quality to Northern White, brown sand has become suitable for many fracturing applications in the Permian Basin. To capitalize on this trend and on higher sand prices, sand mining companies have begun investing in a slew of new mines in West Texas.

Several obstacles plague the sand mine planning process. Firstly, many proposed mines are near the habitat of the dunes sagebrush lizard, a candidate for official designation as an endangered species. Consequently, some sand mining companies have strategically purchased land to evade the lizard’s habitat. Nevertheless, the lizard’s presence will likely subject mining companies to heightened regulatory scrutiny. Secondly, many proposed mine sites do not have adequate road infrastructure, and the commissioning of new roads could lag that of the sand mines themselves in some cases.  Finally, some analysts are worried about water availability at proposed mine sites.  While some sand mining companies have reportedly purchased large swaths of acreage near their mines to secure adequate water supplies, other mines may be hindered by insufficient available water.

While some of these mines are being developed by well-established companies with proven track records and paperwork in order, others have failed to file for permitting or to present credible development plans. Moreover, several mining firms have reported difficulty financing themselves and have been forced to resort to discounted sand pre-sales to obtain the capital necessary to bring their mines online. With these challenges in mind, PowerAdvocate has estimated near-term sand supply growth (Figure 3). 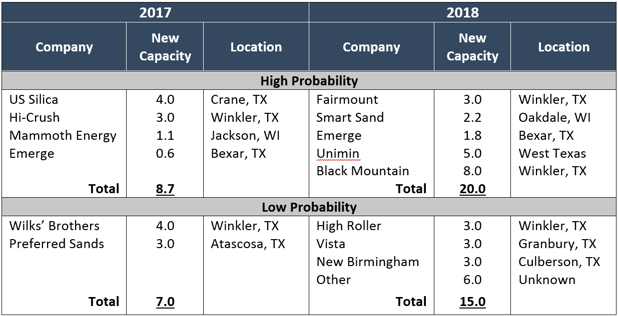 Is a Sand Market Crash Imminent?

Our estimates indicate that total sand proppant supply is on track to exceed demand by roughly 20-25 million tons over the remainder of 2017 and 2018 (Figure 4). At face value, this would indicate very bearish fundamentals for sand prices. However, we expect the ongoing challenges of bringing sand to market to negate the effects of oversupply and keep sand prices from dipping, just as they did from the second half of 2016 through the first half of 2017. 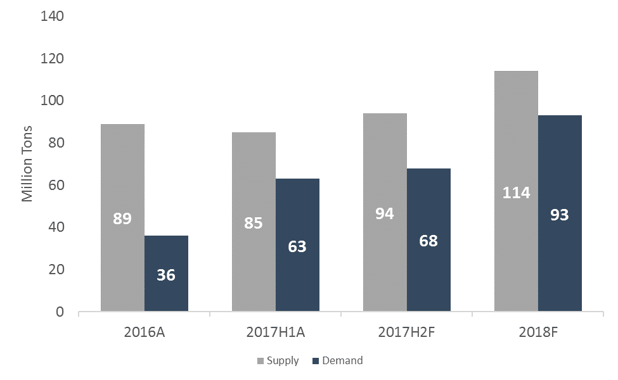 While the supply chain for brown sand is shorter and simpler than that of white sand since it excludes long-haul rail lines and transloading facilities, it nonetheless faces logistical challenges. Deficiencies in road infrastructure and water availability may continue to hinder sand mines even after they come online.  More importantly, continuing shortages of trucks and truck drivers in West Texas will increase sand delivery costs, particularly if drilling and completions activity in the Permian continues to increase. PowerAdvocate’s discussions with market participants have consistently indicated that the availability of trucking is a critical concern for E&P operators. Overall, we expect increasing oversupply to slow sand price inflation, but anticipate that prevailing logistical bottlenecks will likely prevent significant sand price deflation from occurring.

Interested in learning how to use market data to hold down sand and other costs?