Oil Has Crashed. Which of Your Suppliers are Withholding Savings?

When oil prices crash as they have recently, some suppliers will try and keep those savings for themselves.  By looking at the prices of products and services that are affected by the price of oil you can identify savings opportunities.  As an example, let’s take a closer look at how freight costs (which are largely driven by the cost of gasoline and diesel) have reacted as gas prices have plummeted over the last 9 months. 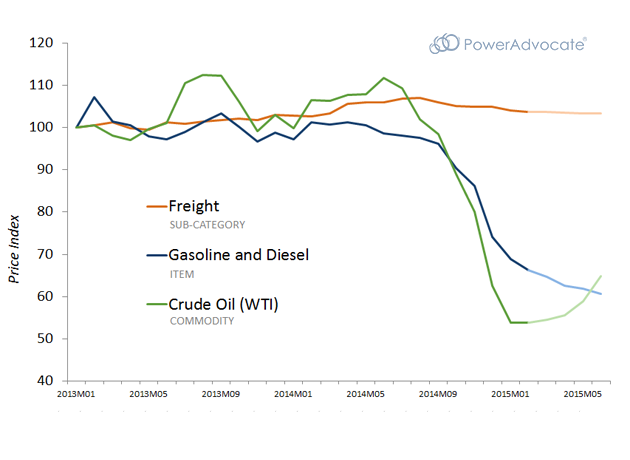 As the chart above shows, the price of freight has remained constant during the period where both crude oil and fuel prices have been crashing.

So why are you still paying so much for freight?  It’s certainly not the lag time between the price of crude oil and the price at the pump.

These price shocks represent enormous opportunity for suppliers who can take advantage of them. Clearly, gas stations don’t have this luxury because fuel is too easily tied to the price of oil.  However, when you get 2 and 3 degrees away from the underlying commodity, it becomes much easier for suppliers to keep an outsize portion of the savings for themselves.

Consider the basic facts: fuel makes up ~40% of the cost of freight and as of the end of February, fuel is down ~35% since June. Yet freight prices are relatively unchanged.  These are dollars that could be passed on to you.  When prices increase, aren’t the costs passed on to you via fuel surcharges?

The trick to capturing these dollars is to actively seek them.  If you wait for prices to correct themselves, you may be waiting a long time.

What happened to Freight prices during the 2008 oil crash? 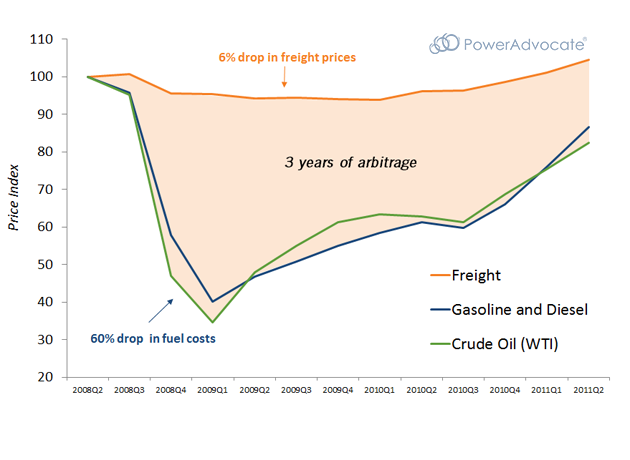 After the last oil crash, prices of freight were slow to react to falling oil, and only dropped a quarter of what they should had all fuel savings been passed on to buyers.

What goes up, doesn't always come down

While other factors can influence how sensitive a product or service is to its underlying commodities, like how contracts are structured.  It's important to make sure that price changes don't only come when it benefits the suppliers.

Looking at another example, from 2005-2008 oil more than doubled in price.  The price of asphalt followed suit, climbing 170% in the same time frame.

When oil dropped back below the original 2005 levels, asphalt producers didn't seem to notice, creating a similar period of arbitrage that lasted through the middle of 2011. 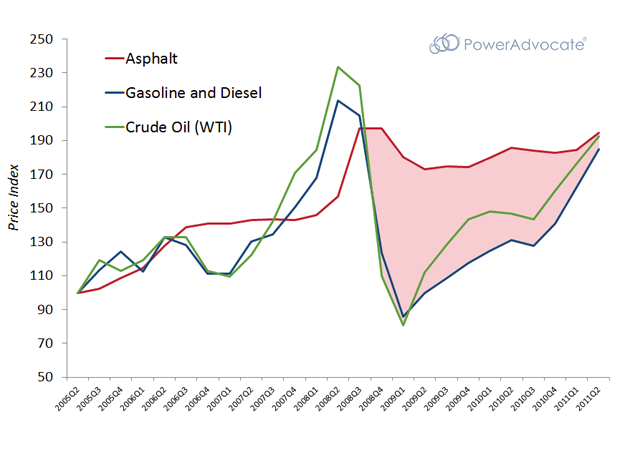 What can I do about it?

Whether it's a renegotiation or a change in contract structure, when it comes to capturing savings, information equals dollars.  Fact based, data driven conversations with your suppliers can reap more savings in less time.

Oil isn’t the only commodity that has declined in the past 9 months.  To talk with one of our experts about how you can use energy market intelligence to save money now, send us an email and ask to speak with our Energy Intelligence Group.