On May 5, US President Donald Trump announced that Washington would raise tariffs from 10% to 25% on $200 billion of Chinese goods under List 3 of the Section 301 trade dispute. The President tweeted that trade negotiations with Beijing were going “too slowly,” and said the escalation was necessary because China was trying to backtrack on previous commitments.

While Lists 1 and 2 covered mostly industrial materials, List 3 covers a much broader range of products – both industrial and consumer goods. As Figure 1 below shows, List 3 covers nearly 1,200 chemical and 500 metal products, as well as hundreds of consumer goods from food and fabric to plastic, paper, and wood. China accounts for a large share of US imports of many of the metals and chemicals on the list, which are particularly vulnerable to cost escalations.

List 3 does not include rare earth minerals, which are key inputs to electrical products and other advanced manufactured goods. A group of 15 rare earth minerals was originally included but subsequently removed before List 3 tariffs went into effect. This group includes barite, a key weighting agent for petroleum drilling fluids, and antimony, a metalloid widely used in batteries. Other metals, like titanium and cobalt, remain on List 3.

Figure 1: US Tariffs on Imports from China

The new tariffs are the latest volley in a trade war that started in March 2018, when the President signed a memo justifying US action against China under Section 301 of the Trade Act of 1974. Section 301 is intended to shield innovative US industries from unfair foreign competition, with an emphasis on intellectual property protection. An investigation by US Trade Representative Robert Lighthizer found China’s practices “related to technology transfer, intellectual property, and innovation” to be “unreasonable, unjustifiable, or discriminatory … and restrict[ing] US commerce.”

Since then, the tariffs have come in waves:

The most recent tit-for-tat clearly represents a setback for trade talks. Things can change quickly, as we have seen, but for now the end of the trade war appears far off. From Washington’s perspective, there is little reason to cede ground if US economic growth remains strong. By some measures, the US economy looks as strong as ever: GDP grew by an estimated 3.2% in the first quarter of 2019, and as of April the unemployment rate was 3.6%, the lowest level in decades.

Still, other indicators paint a less rosy picture, as Figure 2 below shows. US manufacturing production and capacity utilization have fallen since January 2019, and the probability of recession has risen sharply since the fourth quarter of 2018, as measured by the Federal Reserve Bank of New York’s yield curve monitor. Furthermore, since List 3 tariffs are the first to impact consumer goods directly, US consumer spending may soften in the coming months, threatening overall economic growth.

With the US economy at risk of a slowdown and Chinese growth already decelerating, Washington and Beijing both have too much at stake to allow negotiations to break down completely. Given that China exports far more to the US than vice-versa (the US trade deficit with China was nearly $380 billion in 2018), Beijing has a disadvantage in the negotiations. But pressure for the US to make a deal will mount as the 2020 presidential election draws closer. 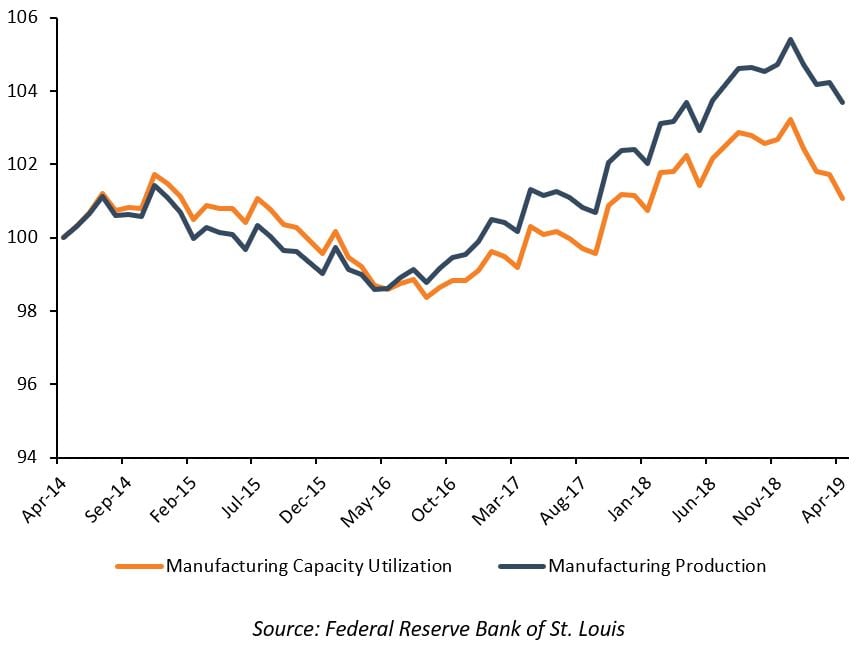 What’s at Stake for Supply Chain?

While the next developments in the trade war are uncertain, what is certain is that prices respond to trade negotiation news (often in speculative, short-lived ways). To weather the storm of market fluctuations, supply chain teams should ask themselves if they have the right data and insights to answer critical questions such as:

In considering the above questions, incisive data insights about the market are critical for understanding how market movements pose risk – and opportunity – in cost management. If you’re interested in learning more, or interested in hearing about how >100 energy firms are already leveraging market data to manage costs, feel free to reach out to us here.