It's no secret that many of the input costs to Oil & Gas firms have started to rise in the last year. Chemicals such as ethylene, propylene, and many others are no stranger to that trend. But there's no culprit more extreme than methanol, whose prices have risen by >180% in the span of just one year.

Methanol prices are seeing drastic increases across the board: in the last month, the ICIS US Gulf Coast Methanol benchmark reached a 2-year high, 180% higher than the year before. Methanex contract reference prices have seen similar increases, and are currently at $500 per metric ton ($1.50 per gallon). These domestic price increases are broadly in line with global methanol price trends. 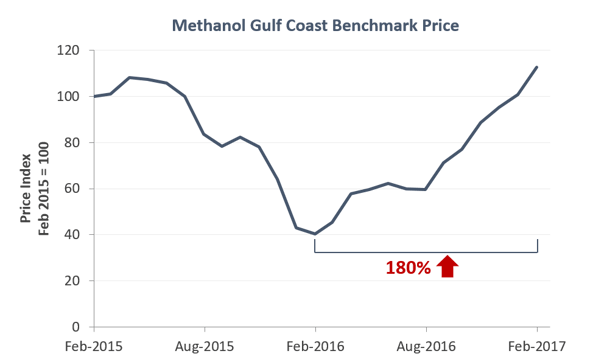 Following the decline in energy prices in mid-2014, methanol prices dropped drastically, hitting a seven-year low in February 2016. The first quarter of 2016 saw a reversal to that trend, and prices have been climbing up since.

Chemical prices, particularly methanol prices, are on the rise due to rising feedstock costs, tightening supply, higher demand, and industry speculation that President Trump’s ambitious infrastructure plans will boost demand for materials and chemicals such as polymers, coatings, adhesives, and solvents.

Outlook and Impact to Oil & Gas

Chemical buyers, particularly methanol buyers, can expect to see price hikes as contracts roll over. Although the energy industry represents a very small end-market for the chemical, methanol accounts for 10%-20% of the total chemical spend for upstream and midstream oil and gas companies. Specifically, it is used as a de-icing agent and hydration inhibitor in oil and gas wells, pipelines, and compressors.

As supply tightens further amid healthy demand in the first half of 2017, we expect methanol prices to continue to rise. Additionally, the US will lose close to a quarter of its methanol production capability in April when Celanese closes its acetyls complex in Texas for a 4-week maintenance period.

On the upside, the second half of 2017 will bring a substantial increase in the methanol supply when OCI’s Natgasoline methanol plant in Beaumont, TX begins operating. This will be the largest plant in the US and is expected to produce 1.8 million tons per year, likely easing prices in late 2017. We recommend buyers, if possible, wait to purchase methanol until the second half of the year.

Interested in learning how to use market data to hold down methanol and other costs?