How Will the Greek Debt Crisis Affect You?

Global markets reacted feverishly to the outcome of the June 5 Greek referendum that has opened a new chapter in the country’s five-year debt crisis.

Greece faces acute hardship in the coming months as its banking system runs out of money and the country becomes unable to pay salaries and import foreign goods due to a lack of euros.

While energy firms' concerns are justified given the market’s significant reaction to the Greek vote (crude oil alone dropped almost 8% the following day), the question remains – How will Greece affect your operations?

Greece is not your main concern, the fallout in the rest of Europe is

Direct exposure of North American energy companies to Greek industry or financial institutions is close to zero. However, Europe’s financial system is significantly exposed to Greek debt, which is unpayable, prompting European officials to do all they can to stem the fallout from the rapidly evolving situation.

As Greece decides whether to issue its own currency, default on more debt, keep its banks closed, or even nationalize industries, different parts of Europe will experience the contagion from these decisions in different ways.

Debt relief is likely to be the focal point of any future talks. Bank depositor “bail-ins” and prolonged capital controls are also very likely. These developments would increase concern across European markets and negatively impact Southern Europe’s already beleaguered banks.

Lending to businesses in the southern part of the continent would become more difficult and borrowing costs would rise, increasing the risks of small and medium suppliers struggling to meet obligations to their clients.

Northern suppliers, especially those situated in Germany and in certain countries outside of the Eurozone (the UK, Switzerland, Sweden, Denmark, etc.), have ample access to funding on good terms and will remain more insulated from any future fallout originating in Greece or Southern Europe.

What can you do about it?

We encourage all energy firms to thoroughly identify their exposure to European suppliers in order to enable their organizations to distinguish higher risk spend (Southern Europe) from lower risk spend (Northern Europe). The chart below illustrates this risk assessment. 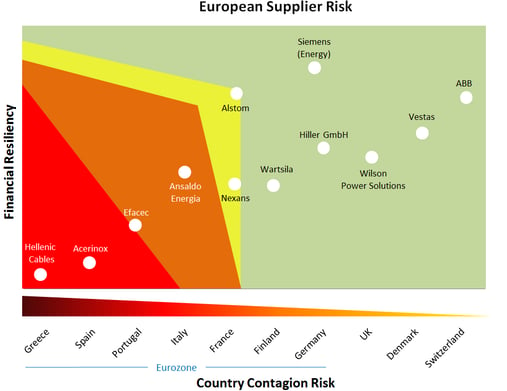 With ongoing negotiations taking place between Greece and its creditors, much can happen before the final July 12 deadline for agreement on reform-contingent financial assistance to Greece.

While policymakers are leaving all options on the table, what we expect at this juncture is the eventual issuance of a new currency by Greece, though not necessarily its immediate exit from the common currency zone.