Oil & Gas Supply Chain teams have built up a tried and true toolkit of approaches to cost reduction spanning everything from negotiation strategies to RFP’s to demand planning.

But beyond that standard toolkit, what are the most innovative Oil & Gas firms doing to drive cost out of their organizations?

In today’s article, we provide specific examples of out-of-the-box ideas that other Oil & Gas firms are using to creatively reduce costs. We’ll also share several tools from renowned creativity experts to help Supply Chain teams think about how to brainstorm their next big idea.

Let’s start with a detour into the world of Utilities for a lesson in bold Supply Chain decision-making.

Houston Lighting & Power Company’s head of supply chain, Janie Mitcham, was getting her coal delivered by Burlington Northern, which had a monopoly on railroad access to a key plant. Consequently, she had very little negotiating power to drive down the exorbitant prices they were charging. Janie tried angle after angle, from appeals to reason to threatening legal action, and it was all met with a shrug.

Finally, she knew the issue was only going to be resolved if she took it into her company’s own hands. She explored her avenues for coal delivery and finally landed on an innovative, but at first glance, outrageous, option: building her own railroad.

Janie’s new railroad would connect her plant to a railroad owned by Union Pacific, a neighboring railroad that previously could not access the plant. Janie then bid out the contract to Union Pacific and received a 25% discount from her coal delivery rates with Burlington Northern.

And it worked. The railroad cost $24 million to build and, at the time, was expected to save $50 million a year.

* Abridged from Bargaining for Advantage: Negotiation Strategies for Reasonable People

Creative solutions like Janie’s can often seem like elusive ‘aha’ moments. But in fact, Wharton Professor Rom Schrift has proven that creativity is a muscle that can be built up through the repeated practice of proven exercises, or in his words, “creativity templates.”

Let’s take one of Schrift’s templates, called the "Replacement" template, as an example. In this template, he encourages problem solvers to:

Let’s take Janie’s case as an example. In her case, Janie was looking to replace the monopoly that ate away at her costs.

If she were to evaluate all of her possible options—whether feasible or not—she might end up with a table like the below: 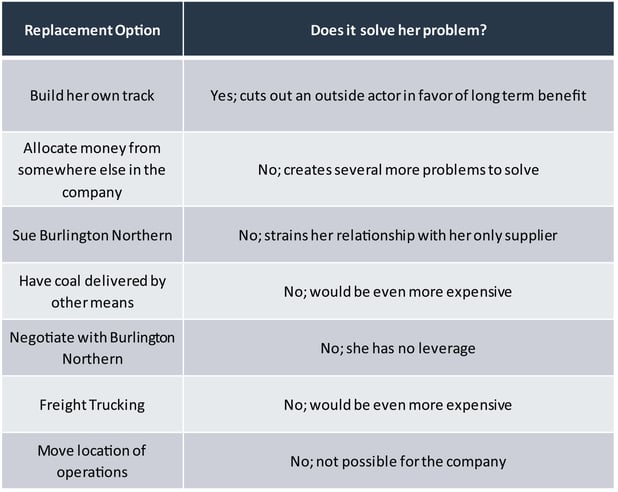 Finally, Janie could run cost efficiency analysis against each option to determine which ones were feasible and which were far-fetched. Ultimately, it was her willingness to expand her array of options beyond the classic Supply Chain toolkit that led to her success.

By using brainstorming exercises like these, Oil & Gas firms can approach age-old challenges with new and creative tools.  So what kinds of approaches have we seen innovative firms use to drive value over the last two years?

Nine times out of ten, the mere act of listing out all possible options with a specific goal in mind can lead to a more creative, efficient idea than traditional brainstorming alone, notes Schrift. Creativity doesn’t have to mean building your own coal-fetching robot. Rather, new ideas for solving problems can simply be those we may never have given a chance in the first place.
Subscribe to Cost Insights