The midstream landscape has drastically changed in the last year: with commodity markets plummeting and E&P investment declining, the industry's entered a new and uncertain world. As 2016 fast approaches, PowerAdvocate has rounded up the top 4 trends every midstream executive should be watching to make sense of the new environment:

The unprecedented decline in oil prices has wreaked havoc on E&P operators. From laying off personnel to shuttering production, producers are making drastic changes to their operations across the board. While midstream firms have thus far been largely insulated from the upheaval, 2016 will likely mark a key turning point as commodity pressure from E&P operators begins to affect the midstream market.

The table below shows that 9 of the 12 S&P 500 companies that posted top losses in Q3 2015 were E&P firms: with that kind of financial pressure, continued infrastructure investment is becoming more and more uncertain by the day.

As long-term contracts expire and new projects come under increased scrutiny, midstream firms are becoming ever more aware of revenue pressure and focusing instead on driving costs down, introducing capital efficiency, and improving their estimates to ensure they invest in only the most profitable projects.

The number of midstream firms in the market has exploded in the last 5 years, fueled by the growth of North American unconventional production. But with more competitors comes more competition: project bids are more difficult to win than ever and costs are being pushed to their minimum. In this high pressure environment, accurate estimates and low cost profiles are critical to winning the right projects.

The landscape becomes even more tense when we consider the state of the industry: with less new investment by E&P operators comes fewer projects for midstream firms to compete for. Decreasing projects and increasing firms creates a fiercely competitive landscape where cost visibility and speed to market reign. 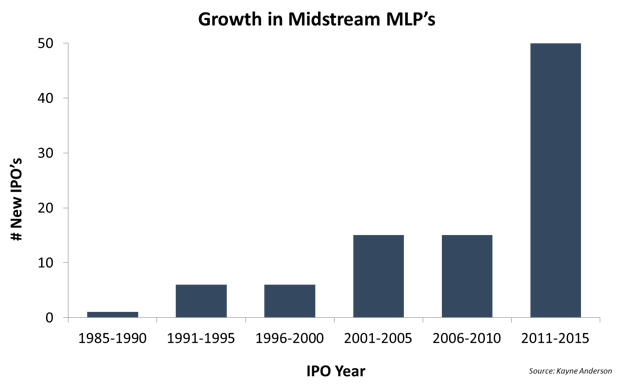 The midstream industry has thus far been insulated from the more significant effects of the drop in oil prices. That does not mean, however, that the coast is clear.

The chart below shows that E&P financial performance is correlated to the prices of oil & gas. But what's less talked about is the similar (though less drastic) decline in midstream financial performance. In fact, the Alerian MLP index has dropped a full 29% since September 2014.

Moving into 2016, midstream firms will likely move away from pouring dollars into blind capital investment and instead become more focused on capital efficiency and operational improvements. Those that succeed will be able to evade the financial pressures that are bearing down on the market at large.

The silver lining of the commodity decline is a market that's ripe for cost savings. With metals, chemicals, plastics, fuel, and demand all plummeting, midstream firms have an incredible opportunity to reduce their project and operational costs and increase their returns.

Many midstream firms have begun capturing that opportunity: for instance, pipeline costs have declined a full 20% over the last year, according to the Oil & Gas Journal. But surprisingly, per-mile cost reduction has primarily been realized in labor; material costs per mile have actually increased over the last year, suggesting there's still a long way to go.

Firms that can lower their costs will not only have a better chance of winning projects, but will also increase their returns, securing a strong financial foothold in an environment that's fundamentally unsteady. To learn more about capturing market opportunity, click here to view our Cost Reduction Webinar.

From pressure in the E&P market to indicators of lagging financial performance, the midstream market hasn't had it easy in the last year. But firms that can secure investments in the right projects, win competitive bids, and take advantage of favorable input commodity markets will be well-positioned to succeed in 2016.