In January 2015, monthly line pipe imports to the United States, including circular and welded line pipes, reached 315,000 metric tons. By September 2016, these imports dropped to 60,000 metric tons, more than an 80% decrease in 20 months. While low oil prices over the last two years might have discouraged investment in pipeline projects and thus decreased the demand for line pipe, they impacted less than 30% of US pipeline projects in 2015, according to the US Oil & Gas Association. One significant driver behind the drop in imports remains tariffs.

In today's post, we share some innovative new ways to approaching line pipe sourcing in a world of increasing tariff determinations.

Since late 2014, three different steel trade cases have impacted several types of line pipe, including welded, circular, and stainless line pipes. This situation has dramatically impacted imports of line pipe into the US.

Steel plate is the main component of line pipe fabrication, and transforming it into line pipe is a relatively manageable process. 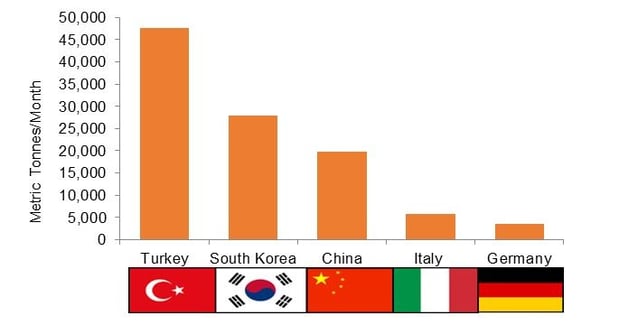 Since 2015, plate rolling has presented a cost-effective solution for clients to meet line pipe demand, avoid line pipe tariffs, and even customize line pipe more efficiently for specific projects. Buyers purchase raw steel plate abroad and ship it to the US to turn into line pipe. Historically this had only been done by a few companies, like Vallourec and Global Sourcing, to take advantage of cheaper foreign steel plate. However, this process has recently expanded domestically, led by final line pipe consumers themselves. Rolling and coating facilities are mainly located in Pennsylvania, Indiana, Illinois, and Alabama, where line pipe is rolled, welded, and coated with different fusion and bonding components to meet the needs of the project.

Steel plate is currently facing a trade case with preliminary rates due by the end of November. So far, this trade case has not impacted the volume of steel plate shipments into the US, mainly because top suppliers, such as South Korea, were dismissed from the investigation, while others, such as Germany and Italy, were not included in the original filling. Future trade cases could jeopardize the efficiency of this practice for line pipe consumers, but may also trigger new markets for both steel plate and line pipe.