US Shale Production May Lead to OPEC’s Failure: Oil Markets at a Precipice

Last fall, renewed optimism resounded across oil markets. The North American rig count had fallen by almost 50% since January of 2016 and was a tiny fraction of where it stood prior to the oil price decline that began in mid-2014, foreshadowing weak supply growth. Moreover, the Organization of the Petroleum Exporting Countries (OPEC) appeared to finally be ready to take advantage of these lower levels of shale activity by cutting output and paving the way to a recovery in oil prices. North American oil prices jumped jubilantly when this action came to fruition and OPEC signed a major deal in which members agreed to curtail production.

Figure 1: A Brief Oil Market Deficit and the OPEC Deal 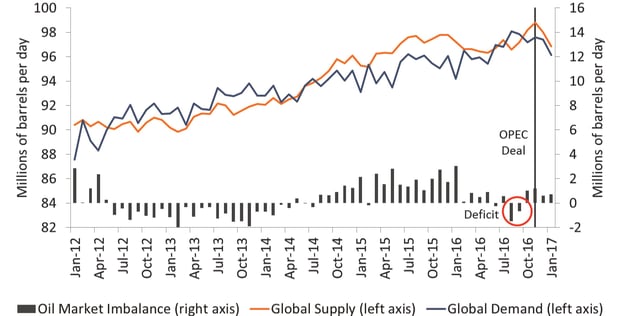 In our latest quarterly webinar, we highlighted that in January, OPEC’s compliance rate (the extent to which OPEC member states cut production in accordance with the deal) was both impressive and historically unprecedented. In February, compliance improved even further to 94%. Furthermore, OPEC had succeeded in getting non-OPEC countries like Russia to curtail output materially. 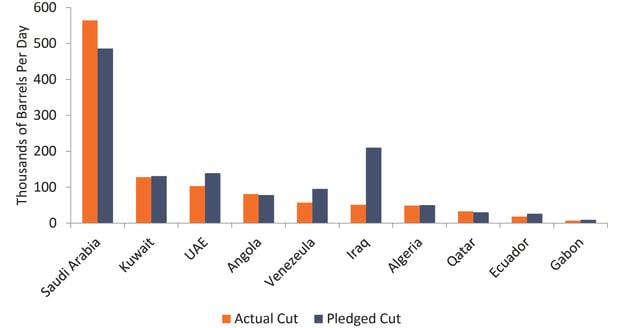 Despite OPEC’s discipline, oil prices have fallen below pre-deal levels due to a sharp uptick in North American drilling activity that shows no signs of receding. In retrospect, OPEC essentially ceded market share to North American producers while gaining no price benefits and recent EIA data indicates that the oil market is back in surplus. 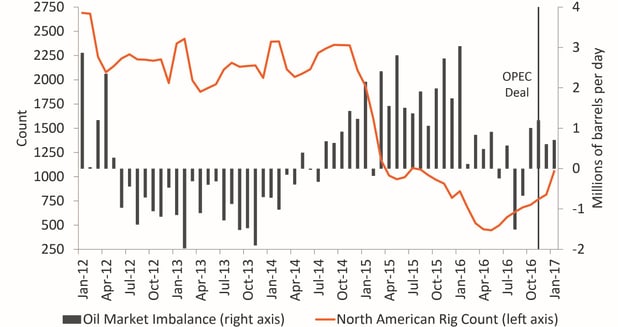 OPEC members are understandably unhappy about the oil market’s current state, and there are some signs that the output deal may be fragile. Both historically and currently, Saudi Arabia has borne a disproportionate share of OPEC cuts, and the country’s energy minister recently stated that the Kingdom would not bear the burden of free riders. Notably, Russia and the United Arab Emirates have yet to deliver the full magnitude of cuts they promised, and Iraq is producing substantially more than its quota allows.  On March 14, Saudi Arabia stated that it reversed a third of the production cuts it undertook as part of the OPEC deal but is still reducing output by more than agreed.

In the meantime, US production continues to ramp up and shows few signs of slowing.  Given that the market is once again in surplus and oil inventories are rising, the current state of the market is not likely sustainable, and we are henceforth at a precipice.

It is now in the realm of possibility that in the short run, oil prices may fall, driven by a collapse of the OPEC deal and/or a realization that US shale production has overshot. OPEC members could extend and/or deepen output cuts, but cartel members may be reluctant to do so, since continued compliance is not assured and it would likely mean ceding market share to North American producers.  Thus, the short term outlook for oil prices is uncertain. In the longer run, the broad based declines in upstream capital expenditure seen around the world since 2014 will eventually sow the seeds of a more robust recovery in oil prices, but the market is likely to experience substantial volatility before it gets there.

Want to learn more about oil markets? Contact us here.