Recently, the O&G world has been faced with challenges around supply and prices for critical materials. Just a few months ago, we covered the risks facing O&G firms when President Trump issued a first-of-its-kind memorandum mandating that American pipelines use only domestic steel. And just last week, the Department of Commerce (DOC) made a tariff decision that will affect supply and prices, this time around OCTG. Read on to learn what happened, what the risks are, and how Supply Chain teams can tactically reduce risks.

In an anxiously anticipated decision on April 11th, the DOC announced the final determination in its review of South Korean OCTG tariffs. As shown in the table below, while South Korea had faced only single-digit duties before, the new ruling sharply increased rates for most suppliers. Since South Korea is a key source of OCTG for the US market, higher tariffs mean strained supply and upward pressure on prices.

More broadly, the DOC’s review also signals that protectionism will continue to be a major risk for upstream Supply Chain teams. Reports show that Peter Navarro, a key trade advisor to President Trump, sent an email to the DOC during the investigation arguing in favor of raising duties to 36%. This type of direct intervention from the administration is highly unusual.

While the final rates came in below 36%, Navarro’s communication is a sign of the Trump administration’s protectionist position. Moving forward, this indicates possible stricter trade protections that could impact other types of E&P equipment as well. Tightened OCTG supply resulting from steeper tariffs could further exacerbate risks to O&G firms at a time when suppliers are already trying to hike prices.

A Tightening of OCTG Supply from Import Barriers

A decline in South Korean OCTG imports because of the DOC ruling would constrain supply, since South Korea is the leading supplier of imported OCTG, accounting for nearly a third of all imports on average. In fact, in 2016, OCTG imports from South Korea totaled 311,000 metric tonnes. 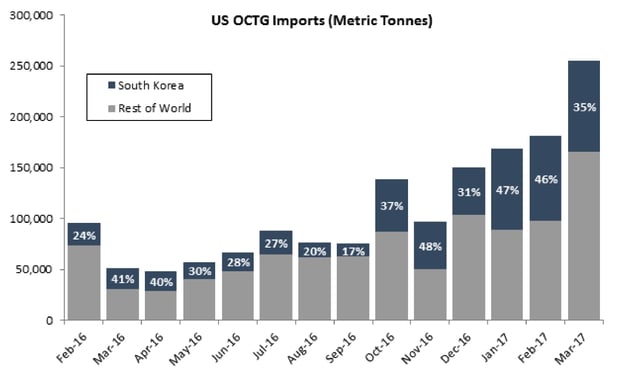 Meanwhile, there’s a growing trend of drilling wells that require longer laterals, thicker pipe, and higher-quality steel grades, which raises the amount of OCTG needed for each job. The industry consumed roughly 468 metric tonnes of OCTG per rig in 2016—a 60% increase compared to 2014.

What this means is that any shift in the supply of South Korean OCTG will be felt strongly in the US market. At a minimum, the harsher duties will result in a corresponding increase in prices for South Korean OCTG, supporting higher price levels across the market. At the most extreme, many South Korean suppliers (particularly those hit with steeper duties, like Nexteel) may even reduce or stop OCTG shipments to the US altogether, contributing to a supply bottleneck.

Suppliers Are Already Trying to Push Through Price Increases

As the market recovers, suppliers have felt emboldened to raise prices in an attempt to claw back lost margin. This creates an exacerbated price risk for key OCTG items in conjunction with recent protectionist policies. While suppliers often cite rising raw material costs to justify price escalation, a quick analysis suggests that it’s a desire for more margin, rather than higher raw material costs, that is the main reason for price hikes. 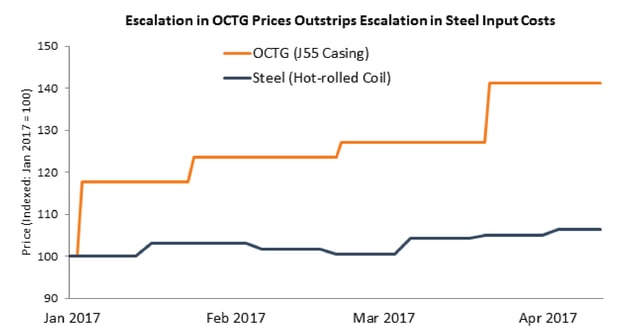 Given all of these factors, what can  E&P’s tactically do to tackle higher OCTG tariffs and multiple announced price hikes from producers like Vallourec, Tenaris, TMK Ipsco, and US Steel?

Despite what’s happening in the OCTG world, there are still ways for O&G Supply Chain teams to minimize risk and try to restrain cost escalation. To prepare for what’s to come, we recommend Supply Chain teams incorporate the following tactical considerations:

If you’d like to have further conversations about how tariffs affect O&G, index-based contracting strategies, cost modeling, or the steel market, simply contact us here.