Rig Count: Not the Crystal Ball it Once Was

For a long time, rig count was a reliable predictor of oil and gas production, industry demand, and pricing across oilfield goods and services. However, today, these correlations no longer hold so strong. For instance, over the last year we’ve seen production remain stable, and often rise, in the face of diminishing rig numbers. The chart below reflects this new trend. 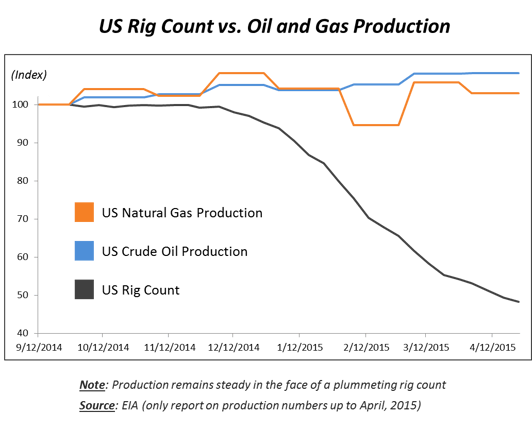 A Better Statistic or Tool?

While rig count is still a useful metric in many ways (e.g., with rig retirement, layoffs reliably occur), it is, at the very least, no longer a bellwether for future production. Furthermore, while oilfield suppliers’ pricing has generally tracked movements in rig count over the last year, the relationship has been imprecise, and will likely continue to be so in the future for reasons outlined in the next section.

What should be used instead? If you’re looking for a single metric, the best answer is well count. However, this measure has its own set of flaws. For one, no one consistently reports on it. Baker Hughes began a tally years ago, but recently suspended the service as a cost-cutting initiative. Second, well count doesn’t take into account variabilities across wells in drilling time, horizontal drilling reach, and other relevant statistics.

Looking for a more sophisticated forecasting tool than well count? Check out our post on cost models, and how to leverage them in supplier negotiations.

Why Count Wells Instead of Rigs?

Advances in drilling technology have been the primary cause of the divergence in rig count and production. Progress here has been so precipitous that its positive effect on production has outpaced lost production from widespread rig retirements.

Whereas hydraulic fracturing and horizontal drilling have been the primary drivers of per-well productivity gains over the last several decades, a separate development has had this effect on per-rig productivity: multi-well pad drilling. The traditional method of extracting oil and gas entailed assembling a rig, drilling a well, disassembling the rig, and moving elsewhere to repeat. Pad drilling turns this process on its head.

Through the use of pads – temporary rig foundations developed to facilitate unconventional drilling in challenging topographical environments – over 20 wells can be drilled with a single rig in a single location. Furthermore, pads allow for more efficient mobilization of rigs from well to well. Pad-enabled rigs not only allow for far greater productivity than their predecessors, but also far greater variability (e.g., a 4-well pad vs. a 22-well pad).

Just How Much More Productive is Pad Drilling?

Let’s consider the Bakken as a case study in the marginal benefit of pad drilling. Rig productivity in the Bakken, as outlined in a recent article by Platts, is shown below. As the percentage of new wells being drilled on pads has steadily increased in this region over time, rig productivity has seen corresponding, and exponential, growth in parallel. 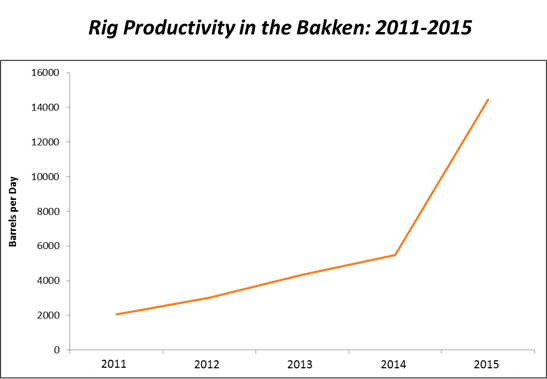 Given the tangible benefits pad drilling offers across productivity, efficiency, and cost-control (saving operators $500K/well on average), this technology will only gain wider-spread adoption in the near future.  In 2006, pad drilling was utilized across only 5% of wells drilled in the US; today, that number is over 60%, and between 70-90% in the Barnett, Fayetteville, and Bakken.

However, it’s important to note that there will be an upper limit on pad-drilling adoption – at least in the foreseeable future – due to the inherent constraints of vertical well bores (e.g., greater spacing requirements). This is why less than 20% of wells in the Permian, where vertical drilling is still dominant, are drilled on pads.

Put simply, rig count is no longer the metric it once was because pad drilling has resulted in far more productive, variable rigs. Thus, as far as individual metrics that indicate future production, demand, and pricing go, well count is your best bet.

For more accurate forecasting of production and pricing trends, you will need cost models. If you’re interesting in learning more about this subject, let us know, and we’ll connect you with our Energy Intelligence Group.