Post-Brexit Market Events to Keep an Eye On

Brexit didn't have to shock the markets as badly as it did. Increased volatility that this event created (see here for our webinar on the topic) highlights the importance of tracking market trends against a calendar of geopolitical events relevant to your business. Such events have demonstrated time and again their ability to jolt markets, and even cause inflection points that drive economies into severe downturns. It is therefore important to look forward to the following international developments relevant to O&G:

Beyond the immediate advantages linked to the weaker British pound, many actionable items relate to more general planning and adoption of best practices within oil and gas supply chain organizations. They include:

For more information on how we’re helping O&G firms take these measures, reach out to our Energy Intelligence Group here.

On a more specific note, let’s dig deeper into one area you should be watching closely in 2016: foreign currency movements relative to the dollar.

Stay on Top of Currency Movements

As countries around the world seek to boost their growth and export levels, they have in many cases decided to achieve these goals by weakening their currencies to become more price-competitive (rather than, say, innovating or investing in efficiency gains). As more and more countries try to do this,  a "currency war" or competitive devaluation comes into play.

As a result of this global “race to the bottom,” the U.S. dollar has continued to gain strength in 2016, which increases the amount of goods that U.S. buyers can purchase from abroad. This is despite the fact that the U.S. is also keeping interest rates very low, which would normally lower the value of the currency. The perception that the U.S. dollar is a safe currency leads many to hold dollars in times of uncertainty. 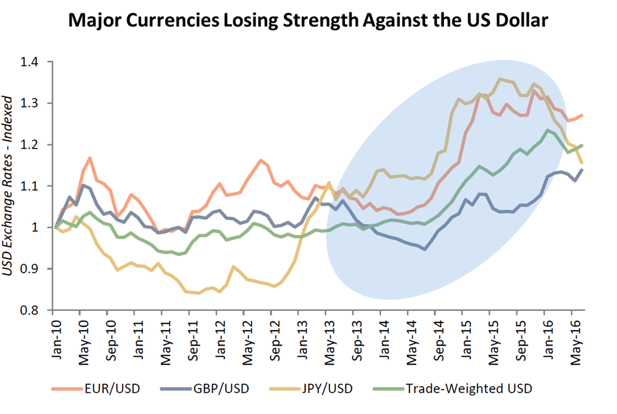 While the appreciation of the U.S. Dollar has occurred steadily over the last several years, currency movements can also be highly abrupt. After the “Brexit” vote in the U.K., the British pound lost 15% of its value overnight, lessening American firms' accounts payable in pounds by that same margin. While the outcome of the Brexit vote was not a certainty, the vote’s date was known well ahead of time, giving those doing business with U.K. suppliers ample opportunity to prepare for such a scenario.

On August 25th at 1pm CST, PowerAdvocate’s Energy Intelligence Group will lead a more in-depth discussion on how currency movements and evolving labor markets will affect your business through end-of-year. RSVP to “Oil & Gas State of the Market 2016” here.