Leverage Spend Growth with Top Suppliers to Save Millions

Today’s analysis – the 6th in our Smart Savings Series – reveals how you can drive down costs with key suppliers by analyzing changes in your spend allocation over time, prioritizing vendors by opportunity size, and renegotiating contracts around increased volume. We’ve found that firms typically achieve 10%+ savings when renegotiating with high-spend, high growth suppliers.

What is Supplier Growth Analysis?

Knowing how much you spend with each of your biggest suppliers is important, but knowing how much more or less you spend with these suppliers on a year-over-year basis is equally important. Supplier Growth Analysis is a means of visualizing and benchmarking suppliers across both of these variables to help you recognize where to pursue volume discounts. Depicted below is a Supplier Growth Analysis that PowerAdvocate recently conducted for an E&P client (actual data has been disguised). In this chart, we covered the firm’s top 20 suppliers, though you could easily expand or contract that scope in your own analysis.

Highlighted in red are the suppliers we recommended this client first pursue volume-based renegotiations with. These are not the suppliers with the highest year-over-year growth rates; rather they have the most favorable combination of year-over-year growth and spend volume. That said, Suppliers 1 – 4 have high enough growth rates that they also present opportunities for meaningful discounts, despite having lower spend volumes. Thus, we suggested the client pursue this group after exploring Suppliers 5-8 and 10-11.

Segmenting top suppliers into a 2x2 table such as the one depicted below will also help you prioritize your suppliers by savings opportunity. Note that a table like this should only include suppliers with positive year-over-year growth. 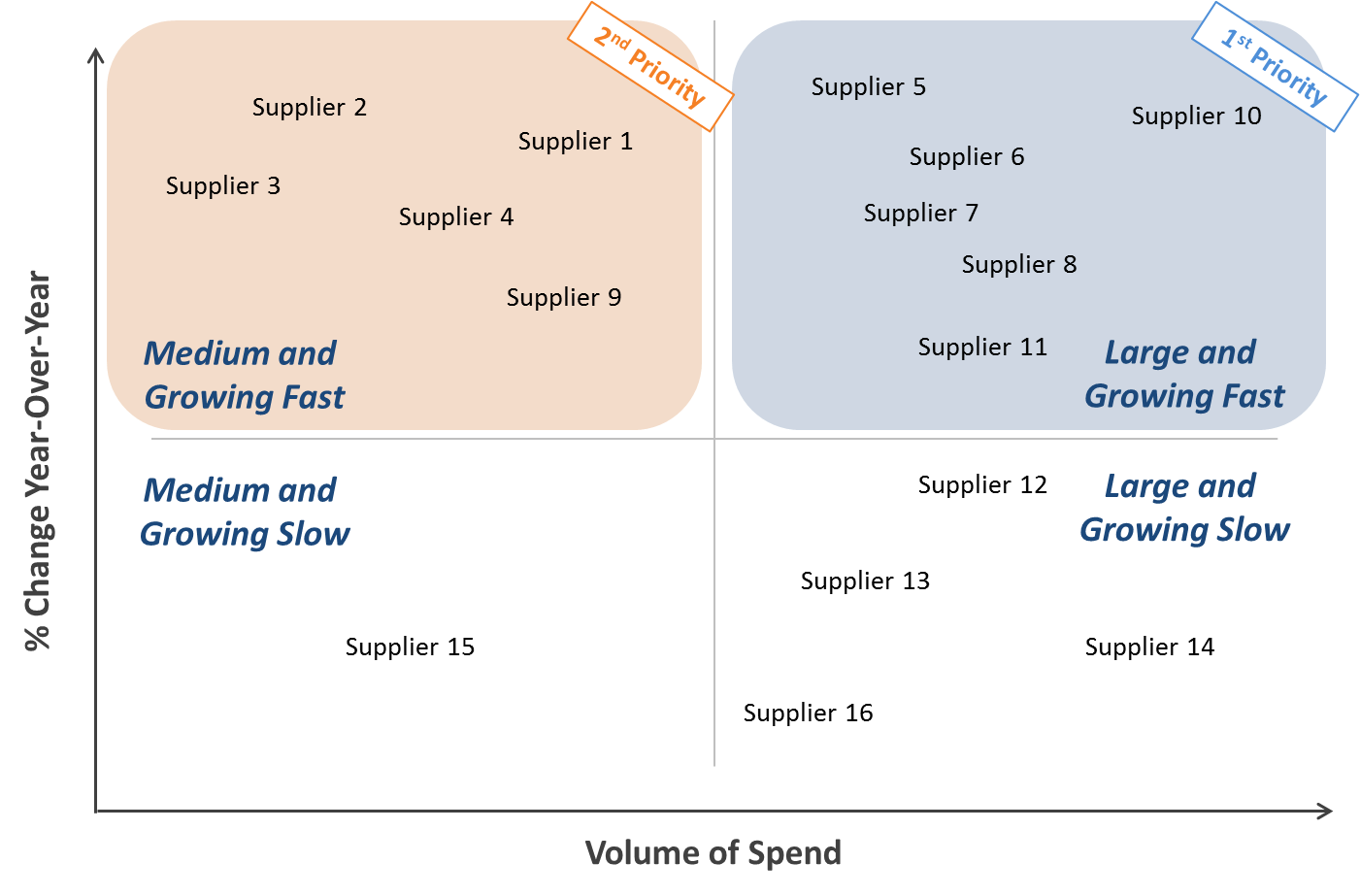 How Do I Evaluate and Address a Supplier Growth Analysis?

Once you’ve determined which suppliers are prime renegotiation targets, you should examine your existing contracts with them to see whether or not price adjustment measures that capture maximum discounts from increased volume are incorporated.

If incumbent contracts are not structured in a way that fully capitalizes on volume growth, you should seek to amend them through data-driven renegotiation. If you can demonstrate to a supplier that you’ve spent, say, 50% more on their products or services this year than you did last year, but received little or no corresponding reduction in unit prices, you shouldn’t have difficulty reframing your contract. Further, you should not just renegotiate around current volume increases, but also around future volume increases to minimize administrative burden down the line.

For our Permian-specific insights, check out our data blog at PermianCosts.com
To learn more about PowerAdvocate, visit our website.