How Saudi-Iran Tensions Could Generate a Windfall for E&P

As oil prices began falling in mid-2014, oil market observers naturally assumed that OPEC would play its traditional role and cut production in order to stabilize prices.  However, since then, the group has failed to implement any meaningful cuts, contributing to a massive global supply glut and a bear market in crude.  While this course of action is partially a response to the economics of US shale plays, it has been driven by internal clashes within OPEC, particularly between Saudi Arabia and Iran.

The two countries have a longstanding and contentious relationship, partly stemming from sectarian and religious disputes, and have opposed each other through most of the late 20th and early 21st centuries.  For instance, Saudi Arabia supported Iraq’s invasion of Iran during the 1980s, while Saudi Arabia has accused Tehran of supporting terrorist attacks in its territory on several occasions.

During the 2010-2014 global oil boom, Saudi Arabia and other Persian Gulf states greatly profited and the Kingdom’s sovereign wealth fund topped $750 billion by mid-2014.  Iran, by contrast, was exiled from global oil markets over most of that time frame.  While the US has long levied sanctions on Iran for a variety of reasons, tensions escalated during 2011-2012 and the US, European Union, and other countries instituted more severe sanctions targeting Iran’s oil and gas sector, aimed at deterring the country from developing nuclear weapons.  At the time, the US and Israel were also seriously considering taking military action to thwart Iran’s nuclear program.

With its back against the wall, Iran threatened to block the Strait of Hormuz, a vital maritime chokepoint through which approximately 40% of the world’s seaborne oil passes, including most of the output of Iraq, Kuwait, Qatar, Bahrain, Saudi Arabia, the UAE, and Iran.  To make this threat plausible, Iran stockpiled 5,000 naval mines and invested in fast swarming attack boats.  These boats have periodically harassed traffic in the strait ever since, although no serious disruptions to oil flows have occurred. 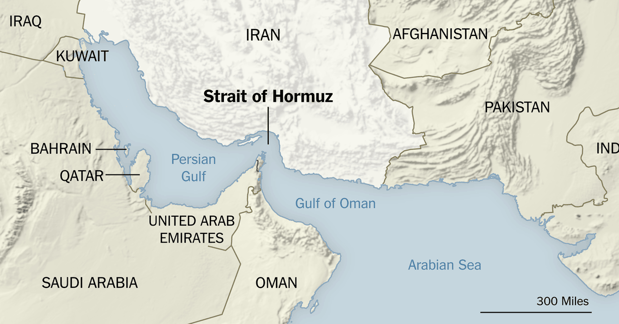 While relations between Iran and the United States remain tense (Iran is still officially listed as a state sponsor of terrorism by the US State Department), there are signs that tensions are beginning to thaw.  For instance, while not directly cooperating, Iran and the United States have a joint interest in and are taking mutually beneficial actions fighting ISIS in Iraq.  In early 2016, the two countries implemented a landmark accord to restrict Iran’s nuclear ambitions after which the US and European Union removed various sanctions.

Saudi Arabia fears that sanctions relief for Iran could boost what they see as Iran’s subversive activities in the Middle East while also enriching an economy that the Kingdom views as an adversarial competitor vying for regional influence.  In addition, the Kingdom has joined Israel in voicing concerns regarding the deal’s efficacy and is worried about potentially having a belligerent nuclear power on its doorstep.  This has led to elevated tensions over 2016. In January, Iranian protestors ransacked the Saudi Embassy in Tehran after Saudi Arabia executed an outspoken Shiite cleric, causing the Kingdom to cut diplomatic ties with Tehran.

These tensions have prevented OPEC from cutting output this year.  Ultra-low production costs and vast oil reserves have enabled Saudi Arabia to become OPEC’s de-facto leader and the country has borne the brunt of past OPEC production cuts.  However, rather than bearing these costs all on its own, the Kingdom wants multilateral participation in any OPEC action to cut production.  Much to Saudi Arabia’s chagrin, rather than cutting output, Iran has spent this year boosting production back to pre-sanctions levels and is actively courting further investment in its oil and gas industries.  In early November, Saudi Arabia reportedly threatened to raise its oil output to 12 million barrels per day if Iran did not agree to join a deal cut production. 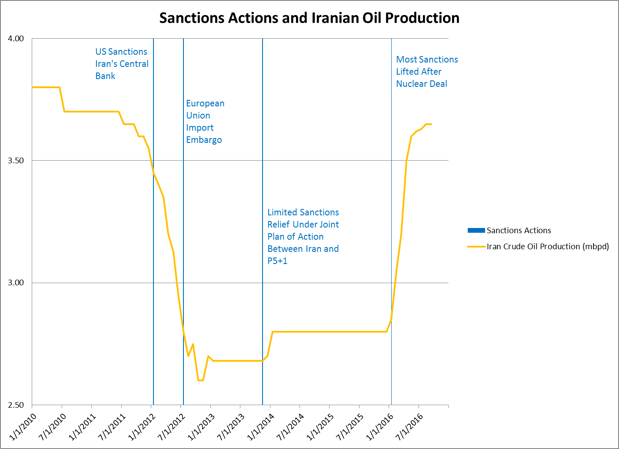 Saudi Arabia would be hard pressed to follow through with this threat.  The Kingdom’s finances have come under intense strain over the past two years and the country has become much less resilient to low oil prices.  The country’s budget deficit was 16% of GDP in 2015 and despite deep budget cuts, is on track to be around 13% of GDP this year. It has burned through over $150 billion of its sovereign reserves and the country’s GDP growth is the slowest it has been since 2009.  Moreover, the Saudi Arabian Monetary Agency has struggled to mitigate growing liquidity problems within the nation’s banking system.

Nevertheless, rather than using oil prices as a weapon against Iran, Saudi Arabia could use actual weapons against Iran.  While unlikely, a Saudi-Iran conflict remains a considerable tail risk in oil markets today and the prospect of an armed skirmish between the two nations is not as implausible as it may seem at first blush.  The two countries are already fighting proxy wars in Yemen and Syria. Moreover, a conflagration between the two countries would surely benefit both economically to the extent it raised oil prices.

Saudi Arabia has also been seeking to preemptively mitigate any potential oil supply disruptions Iran could cause in the Strait of Hormuz.  For years, Saudi Aramco has been steadily increasing pipeline capacity across the Arabian Desert to the Red Sea, circumventing the Strait.  In May, the company announced plans to increase this capacity further, from 5 million barrels per day to 7 million barrels per day.  The firm is also developing oilfields in the southeastern section of the Kingdom.  Thus, in the event of a conflict in the Strait of Hormuz, Saudi Arabia could retain the ability to export the majority of its crude while benefitting from the higher prices such an event would cause.  This increases the Kingdom’s incentive to instigate a conflict.  Additionally, a number of commentators have noted that Saudi Arabia feels abandoned by the US.  In this new environment, the country may take matters into its own hands, particularly if it views the US as doing too little to contain what it views as a rising Iranian threat. 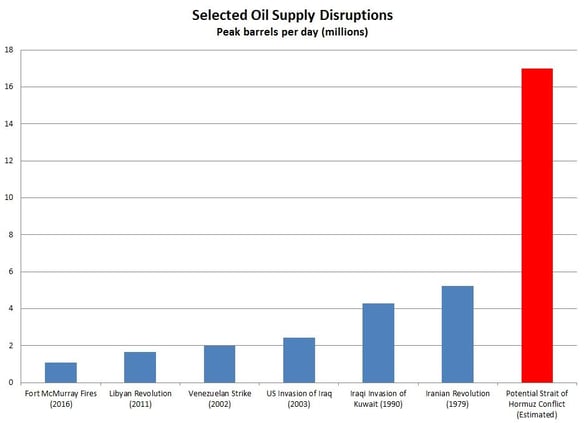 While the United States is still geopolitically aligned with Saudi Arabia and would likely notionally back them in such a conflict, its interests are not as strong or clear-cut as they once were.  As noted, US-Iranian relations are beginning to thaw and since the shale revolution, the US has not relied on Saudi (or indeed Persian Gulf) imports to nearly the same extent as it once did.  The EIA estimates that roughly 85% of the crude oil moved through the strait now goes to Asia, with Japan, India, South Korea, and China all major destinations.

What does this all mean for North American oil and gas firms?  If Saudi-Iran tensions prevent OPEC from cutting production, it could put further pressure on oil prices over the short to medium term, just as it has over the last two years.  However, if these tensions escalate from the status quo and result in an armed conflagration, the resultant increase in oil prices could provide a windfall to US and Canadian companies.  In years past, such an event could have threatened refinery feedstocks; but, as noted, North American refiners are far less reliant on Middle Eastern imports than they were a decade ago.  In any case, North American oil and gas companies should remain cognizant of events in the Middle East.