Over the last five years, the United States has significantly increased its production of oil and natural gas, a phenomenon referred to as the Shale Revolution. US crude oil production has increased substantially, especially in the inland parts of the Gulf Coast and Midwestern states (Figure 1). This shift has impacted the economics of downstream operators; however, the benefits for specific refineries have varied depending on location and refinery crude slate. 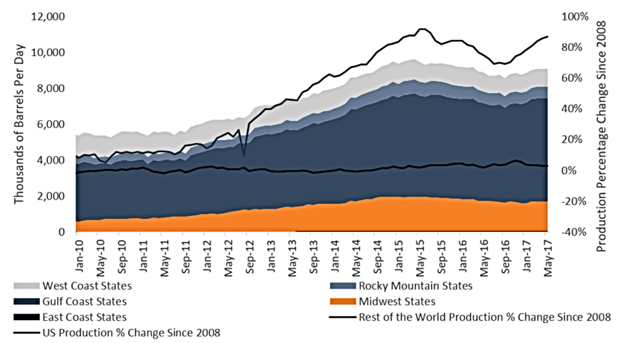 Prior to the Shale Revolution, the United States was much more dependent on imported oil than it is today. As a result, many large refiners made major capital investments to be able to process low quality crude slates like oils sourced from the Canadian tar sands, Venezuela’s Orinoco Belt, and Chad. These investments were viewed as vital to maintaining North American refiners’ competitive edge vis-à-vis foreign competitors by allowing them to source relatively cheap crudes while still being able to sell refined products at a premium.

After 2010, US oil production surged and exceeded production growth in the rest of the world, leading to a relative oversupply domestically. This oversupply was exacerbated by the export ban on US crude, which was put in place in 1975 to reduce US reliance on imported crude oil. Partly for these reasons, the price of West Texas Intermediate (WTI) oil, North America’s benchmark grade, began to fall below the price of Brent, the global benchmark (Figure 2). 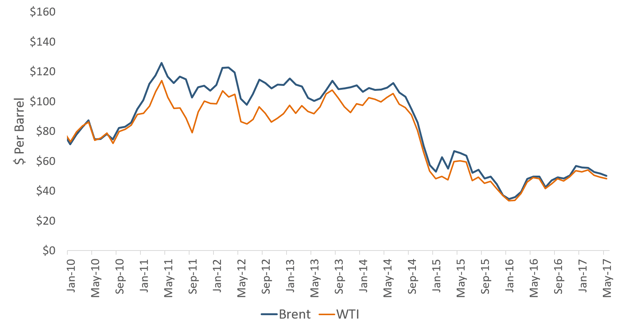 Many analysts pointed to the Brent-WTI spread as a source of competitive advantage for US refiners since they could source cheaper crude than their foreign counterparts. However, logistical bottlenecks in US transportation infrastructure, which were a contributor to the wider spread, made it challenging and more expensive for many refiners to source the cheaper crude. Oil pipeline construction did not keep up pace with surging oil production which prevented the efficient transport of oil to where it was needed most. Resultantly, refiners located close to bottlenecked supply surplus benefitted greatly from reduced feedstock costs. By contrast, refiners on the Gulf Coast had difficulty accessing these discounted crudes. Meanwhile, Gulf Coast refiners who had made investments to process low quality crude slates mostly continued sourcing such slates since they typically traded at a discount to American shale oil.

Figure 3: Feedstock Scenarios for Refiners During the Shale Revolution

The US built 12,000 miles of pipe between 2010 and 2014. Notably, two major pipelines came online in 2014: TransCanada started shipping crude through the Gulf Coast Pipeline, from Cushing Oklahoma to the Texas Gulf Coast, and Enbridge and Enterprise Product Partners’ Seaway pipeline was completed in July. This additional pipeline capacity and falling US oil production due to the oil price crash in mid-2014 have narrowed the pricing spreads between inland and coastal oil prices since 2014. 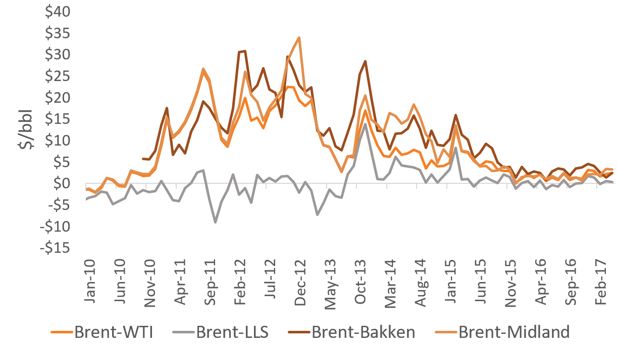 The patterns in refinery economics described above are evident in the crack spreads for refiners across the US. Figure 5 shows that downstream operators able to source etiher crude oil closest to inland supply gluts or process low quality crude (proxied by the WTI/Midwest crack spread and the Venezuelan/US Gulf Coast (USGC) crack spread, respectively) could garner substantially higher refining margins than operators forced to use high quality crudes on the Gulf Coast (LSS/USGC crack spread). Indeed, margins for this latter group do not appear to be higher than those for their European counterparts, represented by the Brent/Northwestern Europe (NWE) crack spread. Just as the difference between inland and coastal crude pricing has converged since 2014, differences between inland and coastal crack spreads have too. 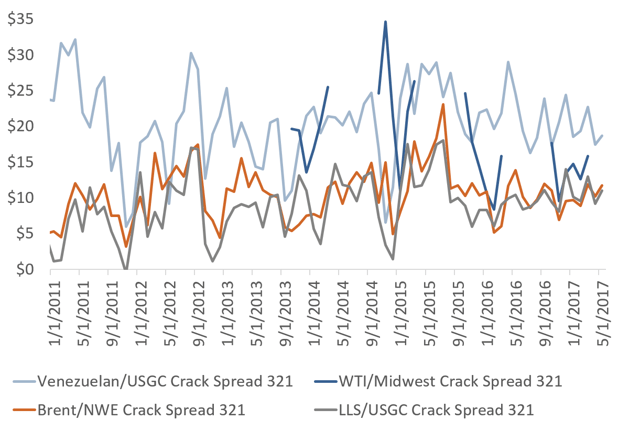 Note: Midwestern heating oil prices are not available during the summer.

Where does this leave the refining industry today? Since the fall of 2016, US upstream drilling and completions activity has surged. However, rather than resulting in an inland supply glut as it did during the Shale Revolution, increased pipeline infrastructure and the repeal of the 40-year old export ban have led much of this oil to be piped to the Gulf Coast and/or exported. This development has fundamentally changed the competitive positions of refineries across geographies. While refineries equipped to process low-quality crudes can still earn higher margins, inland refineries which need high-quality oil no longer have sourcing advantage over their coastal counterparts. Going forward, some coastal refiners may find domestic shale oil to be a more feasible refinery feedstock. Given that US has been dominating global upstream capital expenditure, domestic inland oil production could outstrip pipeline capacity yet again. This could generate a disparity between feedstock costs for inland and Gulf Coast refiners again.  Refiners should plan accordingly.

Want to find out how you can deliver more value from your spend, cost, and supplier data?