Hot-Rolled Coil Preliminary Duties Are Out. How Will They Impact Your Project Costs?

After much anticipation, both the preliminary antidumping and countervailing duties on hot-rolled coil have been announced by the Department of Commerce.  This high profile trade case has the potential to send steel prices soaring for many items that energy companies purchase. So how will these developments impact you?

Read on to learn what’s happened with hot-rolled coil and to receive a list of suppliers that are most impacted by these new duties.

As we all know, over the last year, steel prices have plunged with foreign producers flooding the market with lower cost products. In reaction to those imports, a barrage of trade cases has been filed in the last year in a last ditch effort to prop up prices, decrease imports, and save the domestic steel industry.

Today we focus on just one of those cases: hot-rolled coil. Originally filed in August, the hot-rolled coil trade case has made headlines because this type of steel is widely used across many industries.

In January 2016, the preliminary determinations on countervailing duties were first announced. Domestic steel producers were disappointed with the findings, as subsidy rates of only 7.42% were found in Brazil. While Brazil is an important player, many other major players, such as South Korea and Turkey were spared.

However, domestic producers got better news just this month when the preliminary antidumping duties were announced. While the duties were still smaller than the alleged margins, many more countries were impacted, with the largest duties going to the United Kingdom at 49.05%. Final determinations will be made later this year, with the potential for these rates to increase further. 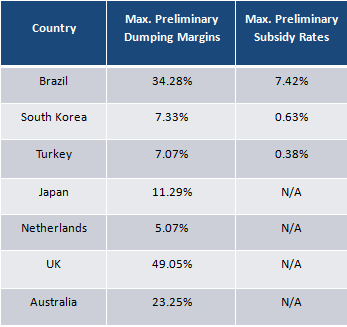 The Impact on Your Supply Base

These preliminary duties are going to have an impact on the price of hot-rolled coil, which in turn will impact many of the items that energy firms buy such as piping, tanks, and structural steel. To help you identify where your supply base is most exposed to the affected producers of hot-rolled coil, we’ve developed a guide to some of the top steel suppliers that are going to be hit with duties.

Below is an example of how an energy company could identify their risk to steel trade cases if they are purchasing line pipe, which is an item significantly affected by hot-rolled coil.

By working with the line pipe suppliers, energy companies can map out where their steel inputs are coming from and then determine the impact of duties accordingly. For those suppliers that are significantly impacted, we recommend working together to seek alternatives to the product being impacted by the tariff. For example, instead of using hot-rolled coil to make line pipe, the supplier could use plate and longitudinally weld the pipe. 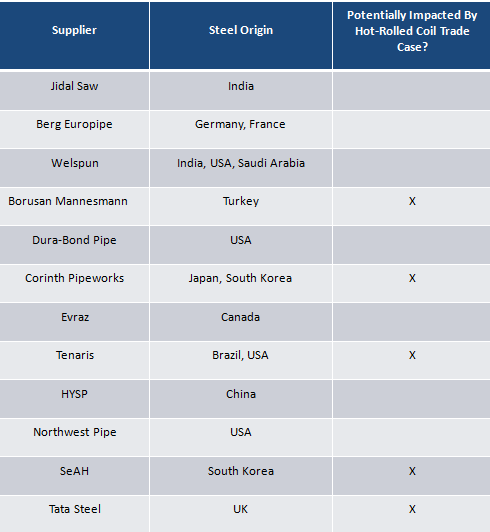 To learn more about how steel trade cases could impact your company, click here to talk with our Energy Intelligence Group.