The 3 Biggest Challenges the Midstream Industry Faces in 2015

The midstream industry is experiencing more pressure than ever before: with rising costs, missed estimates, and the threat of declining volumes, midstream companies are experiencing challenges from all sides. In this industry overview, our energy experts show you the hard data behind the 3 biggest challenges you’ll face in the coming year.

Midstream industry costs have been steadily rising for years and took a sharp upward turn in 2013 and 2014. When combined with the upward trend in capital investment, rising costs have put serious pressure on already strained project budgets. That ultimately means that midstream companies are going to be facing cost overruns, lagging profits, and lower returns on projects.

Cost pressure isn’t expected to level out in the near future, as labor shortages exacerbate wage spikes and commodity volatility squeezes out already slim margins. In the past 3 years, we’ve already seen pipeline companies’ growth in profit lagging behind growth in revenue, but we’re about to see even slower growth as sharply rising costs add unprecedented pressure on project budgets.

In just the last year, midstream companies have seen actual project costs miss their estimates by more than 40%. On average, projects that overran their costs did so by 20.2%. Numbers like that translate into tens of millions of unexpected, unbudgeted costs across the industry.

What’s the impact of those misses? Cost overruns eat into project profits, causing investments to turn from promising generators of return to cost-laden burdens.

With no industry standard for predicting future project costs, many midstream companies are shooting in the dark when deciding on their project portfolios. The result is that more and more executives are finding themselves unwittingly foregoing good investments at the expense of executing bad ones. 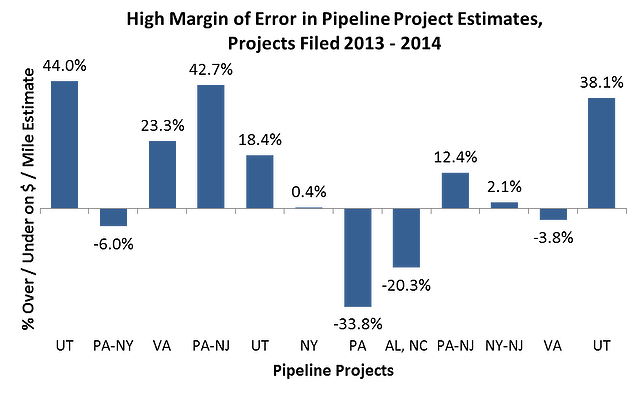 The midstream industry has thus far been insulated from the chaos undermining upstream production. With long-term contracts and significant price hedging, the industry’s short-term fate is nearly guaranteed.

But that outlook changes when we turn from operations to growth. How can midstream companies reach the growth rates they need when their primary customers are laying off rigs and decreasing production at unprecedented rates? With the massive decline in crude prices causing upstream companies to shut down their existing operations and retreat from further drilling, midstream companies are starting to see the limits to their own growth.

As the year proceeds and the E&P industry adapts to the pressures of plummeting crude prices, new midstream projects may soon become unfeasible at the same time that existing projects see lower volumes.

Rising costs and high levels of capital investment only increase the risk that lowered volumes will curtail midstream industry profits. With converging industry pressures squeezing out profits at every turn, midstream companies are finding it all the more urgent to make the right investment decisions and cut costs wherever they can.

For our Permian-specific insights, check out our data blog at PermianCosts.com
To learn more about PowerAdvocate, visit our website.