Negotiating with Oil & Gas suppliers is notoriously difficult: suppliers have a better sense of market demand, they have more data on their cost structures and overhead, and they have more visibility into their competitive landscape. Today, we share 3 research-backed negotiation tactics that Oil & Gas supply chain professionals can bring to the table to remedy that imbalance of information.

Whether you’re a seasoned negotiator or preparing for your first supplier negotiation, read on to learn more about the 3 psychological principles that Oil & Gas supply chain professionals can use to drive down costs.

The concept of “anchoring” comes from psychology, where it’s used to mean that humans tend to estimate the answer to a question by making adjustments to some anchor or initial value that comes to mind. In other words, negotiators have a tendency to work around the first number they see.

This is especially valuable for Supply Chain professionals because it means that the person who cites the first number ends up securing the anchor point around which all other counter offers will be made. This advantage is not insignificant, either— on average, every dollar higher in the first offer translates into fifty more cents in the final agreement. 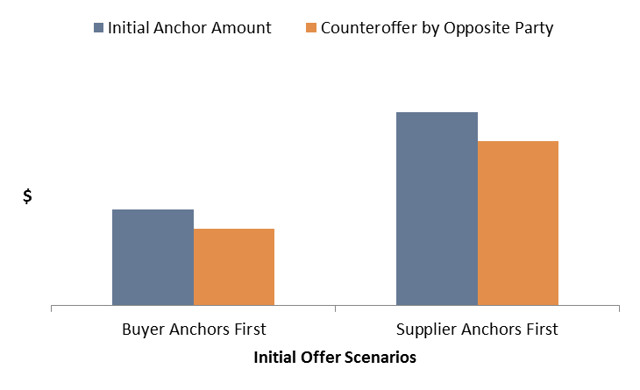 Imagine the two possible negotiation scenarios; the situation in which the supplier must react to the buyer’s initial anchor is much more favorable for the buyer than the reverse.

According to recent research, visuals that evoke scientific imagery (i.e. graphs, charts, and tables) can make the content of a message significantly more persuasive.

For instance, one study found that including elements like chemical formulas or charts made viewers significantly more likely to believe that a medication would work effectively.

For Supply Chain teams, this means that including data-driven graphics in your negotiations can strengthen your claim.  Specifically, using this tactic might mean including: 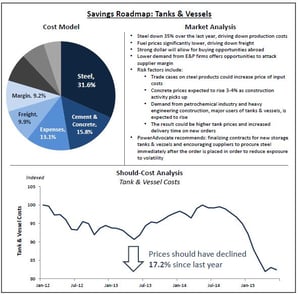 3. Use geographic space to your advantage

When it comes to negotiations, psychologists agree that there’s a home-field advantage: according to one study, negotiating on your home turf can capture between 60% and 160% more value. For Supply Chain teams, that means:

In fact, we’ve seen that the most successful Supply Chain organizations codify their findings into negotiation best practice checklists and playbook templates that include all the information required to make fact-based negotiations repeatable. Those templates might include should-cost analysis, analysis of past spend with the supplier, a cost model, recent KPI data, market analysis, cross-supplier price benchmarking, and more.

Interested in learning more about driving supplier negotiations or building out a playbook? Shoot us an email at costinsights@poweradvocate.com, and we’d be happy to get in touch.